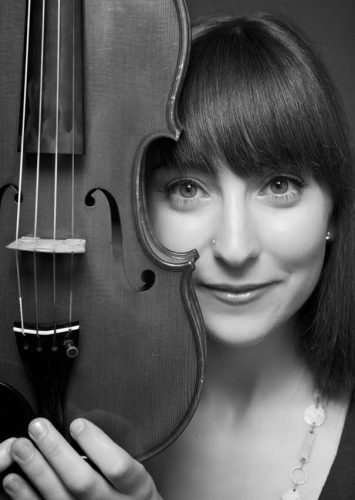 Originally from Connecticut, Cassandra started playing violin at the age of 5, and went on to perform in solo, chamber, and orchestral settings throughout North America and Europe. In her early professional years, Cassandra had the opportunity to perform at such festivals as Thy Chamber Music Festival, Round Top Orchestral Institute, Galluzzo International Chamber Festival, Mendocino Music Festival, Apple Hill, and Hot Springs Music Festival. After graduating from Oberlin Conservatory and College with degrees in both violin performance (both modern and baroque) and English literature, Cassandra moved to San Francisco where she completed her Masters of Music degree at the San Francisco Conservatory of Music. She studied privately with Marilyn McDonald, Greg Fulkerson, David Bowlin, Ian Swensen, Mark Sokol, and Catherine Von Hoesen. Cassandra’s love of chamber and orchestral music paved the way for many of her favourite projects in San Francisco, including her work as an original member and concertmaster of the conductorless chamber orchestra, One Found Sound, a group dedicated to reinvigorating performances of classical repertoire, as well as premiering and performing the works of living composers. She was also a founding member of Friction Quartet, an ensemble committed to the performance of new music. During her years in San Francisco, Cassandra served as Assistant Concertmaster of Berkeley Symphony, as well as a tenured member of Symphony Silicon Valley. She also performed regularly with groups such as Magik*Magik Orchestra, Americana Orchestra, Stockton, Marin, and Merced Symphonies. Cassandra moved to Vancouver, British Columbia in 2016 where she now plays full-time with the Vancouver Symphony Orchestra, her Vancouver-based ensemble Sitka String Quartet, and is an active performer in the Symphony’s Chamber Players series. Cassandra is on faculty at the Vancouver Symphony Orchestra School of Music, the Vancouver Academy of Music, and American Voices’ international summer festival in Lebanon and Kurdistan.