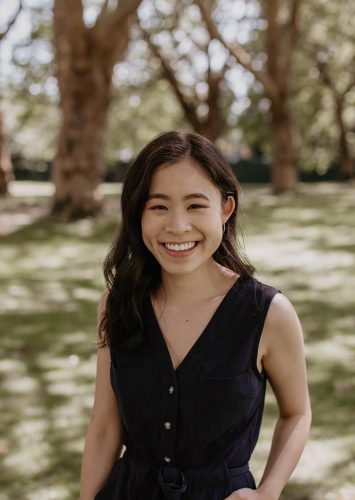 Canadian cellist Trisha Doo, is recognized for her charismatic and radiant  performing style. She has performed as a soloist and orchestral musician in renowned halls from Carnegie Hall in New York City and Severance Hall in Cleveland, to Vancouver’s own Orpheum Theatre. She began her cello studies at the age of ten with Judy Fraser and has since studied under the tutelage of Bo Peng, Joseph Elworthy, Darrett Adkins, Gwen Krosnick, Rosemary Elliott, and Steven Doane. She has had the privilege of performing in both solo and chamber masterclasses for distinguished artists like Joel Krosnick, Mark Steinberg, Gilbert Kalish, Kim Kashkashian, and Ani Kavafian.

As a soloist and chamber musician, Trisha has won numerous local and international competitions. Some of her most notable accomplishments include winning first prize at the American Protégé International Music Competition, where she made her solo debut at Carnegie Hall at the age of 15. Trisha has also had the opportunity to perform with the Richmond Symphony Orchestra after winning first prize at the Richmond Symphony Concerto Competition. In addition to solo performances, Trisha won first prize in the Friends Of Chamber Young Musicians Competition in 2012 and 2014. She has also had the honor of performing alongside Sibbi Bernhardsson (former second violinist of the Pacifica Quartet) and the Koerner Quartet.

Trisha received her Bachelor of Music degree in 2019 at the Oberlin Conservatory of Music with Darrett Adkins, fully funded with a Conservatory Dean Scholarship. In 2021, she received her Master of Music degree at the Eastman School of Music under the tutelage of Steven Doane and Rosemary Elliott with the ESM Graduate and Kohei & Iwa Watanabe Scholarships. In past summers, Trisha has had the pleasure of attending music programs such as  Kneisel Hall, Aspen Summer Music Festival, Yellow Barn Young Artists, Credo, Banff Chamber Residency Program, and Bowdoin International Music Festival, among others.

Teaching is a vital part of Trisha’s musical life. In 2014 and 2015, she was a teaching assistant to the Koerner Quartet at the HawPar SummerFest in Hong Kong. During her time at Eastman, she was a teaching assistant and a cello teacher at the Eastman Community Music School. As a teacher, Trisha believes that every student, regardless of their age or background, has the ability to become a musician and feels that it is her job to provide a safe and welcoming environment for her students to learn and grow. Trisha believes it is important for her student’s learning to take place in such an environment so that they are not only free to be themselves but also experiment with music and make mistakes. As a teacher, Trisha wants to create an environment that supports each of her student’s musical participation and enjoyment. Her goal as a teacher is to not only teach her students to become excellent cellists but also develop a love and appreciation for classical music.