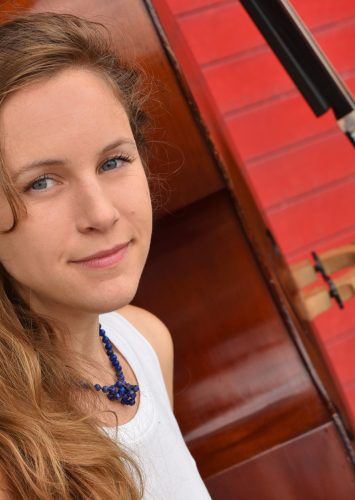 Maggie Hasspacher is a bassist, vocalist and songwriter based in Vancouver, BC. Since moving to Vancouver in late 2019 her hometown of Detroit, she has won the position of principal bass of the Kamloops Symphony Orchestra and performed often as an extra musician with the Vancouver Symphony Orchestra. She was recently chosen as a solo/collaborative artist in a production for the Lucerne Festival/Luzerner Theater in Sept 2022 and has traveled to Switzerland multiple times for various projects associated with the Lucerne Festival ( Lucerne Festival Academy Orchestra, Composer’s Project, Alumni Orchestra and Contemporary Orchestra). Hasspacher has a Doctorate of Musical Arts in double bass performance and pedagogy from the University of Michigan and was member of Grammy-nominated new music group Wild Up from 2010-2021 in Los Angeles. As a solo performer, she has released one album and several videos of her own original music through labels Purple Mollusk Music and R-Team Duo Recordings. She has sung on soundtracks for TV shows on the History Channel and PBS, given live solo radio performances for KPCC-FM Los Angeles and WLRN-FM Miami.