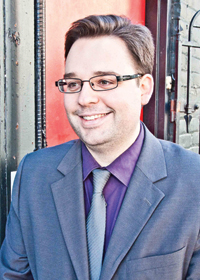 Stefan Hintersteininger is a Vancouver-based cellist, educator, composer, and arranger, equally at home in a vast range of different musical styles. Stefan is a regular extra player with the Vancouver Symphony Orchestra and Vancouver Opera Orchestra, as well as many freelance projects. For many years, he was also a member of Erato Ensemble and Vancouver Inter-Cultural Orchestra, as well as being a founding member of Vancouver’s cutting-edge improvising new music sextet, Ethos Collective. A new music specialist, Stefan has worked extensively with Vancouver New Music, Turning Point Ensemble, Vancouver Pro Musica, and City Opera Vancouver, as well as in commercial recording studios for film and television, and as guest principal cellist with the Vancouver Island and Prince George Symphonies.

Stefan is increasingly becoming known as a composer, having written for many of Vancouver’s foremost performers and ensembles. His Concerto for Soprano Saxophone received its world premiere performances in June 2017 with soloist Julia Nolan and the West Coast Symphony Orchestra. The work was featured during the WCSO’s 2018 Balkan tour, and will also be included in the Lions Gate Sinfonia’s 2019/2020 season. Stefan is presently writing a new work for solo violin for Vancouver New Music’s upcoming season, as well as numerous other projects.

Stefan studied cello (with Dr. John Friesen) and composition at Western Washington University, and at the University of British Columbia with Eric Wilson. Stefan also undertook graduate cello studies at DePaul University in Chicago with CSO member Katinka Kleijn. As an educator, he joined the cello faculty of the Vancouver Academy of Music in 2015 and the composition faculty in 2019. Stefan believes that the path to success lies in establishing a firm grounding of correct technique and the development of good habits from the very beginning. Once these are set, the student has the tools and the freedom to pursue whichever musical direction they are most passionate about.