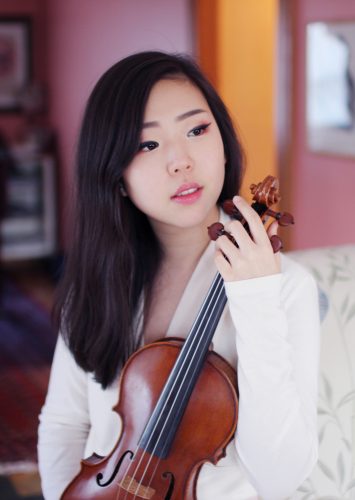 Korean-Canadian violinist, Esther Hwang, is known for her ability to captivate audiences with her virtuosic and passionate performances. She studied at The Juilliard School located in New York City under Professor Daniel Phillips.

In addition to her appearances as a soloist and recitalist, Miss Hwang performed regularly as the concertmaster of the Vancouver Academy of Music Symphony Orchestra and the Juilliard Orientation Orchestra. She is also an active chamber musician as she was the first violinist of the Forza Quartet which won first place in the National round of the Federation of Canadian Music Festivals (2014).

This past summer, Miss Hwang had the wonderful opportunity to participate in the Heifetz International Music Institute. She was also a participant of the Banff’s Chamber Music Residency program (2015), Aspen Summer Music Festival (2015), Finckel-Wu Han Chamber Music Studio in Aspen (2015), Great Mountains Music Festival (2012), and the New York String Orchestra Seminar (2011), where she received full scholarship.

Miss Hwang hopes to inspire the community and contribute to society through her dedication and passion in music.