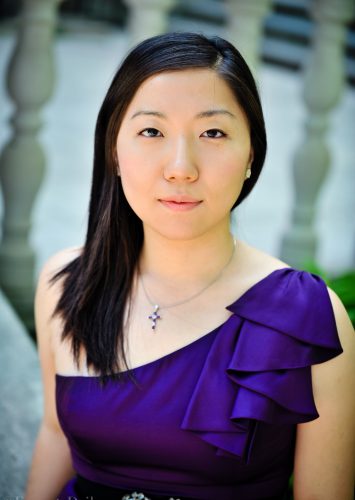 Maria Hwa Yeong Jung is an active vocal collaborative pianist from Coquitlam, BC. She is a
faculty member at Vancouver Academy of Music, working as a vocal coach for college
department voice students and holds a piano studio at Place des Arts in Coquitlam. She also
made her Vancouver Debut with Music Friends concert series last March in collaboration with
vocal trio Heliotrope and has collaborated with many other artists in Vancouver area ever since.
She was also part of the faculty of the Inaugural Summer Musical Theater Intensive program at
Vancouver Academy of Music in summer 2018, participating in tour performances in Sidney, BC
and Kelowna, BC as well.

Before her recent move to the Greater Vancouver area, Maria has worked at University of
Toronto Faculty of Music as a vocal coach and staff accompanist, and accompanied the
renowned Oriana Women’s Chorus and Acquired Taste Choir with conductor Mitchell Pady. She
also worked as a music director and repetiteur for the Summer Opera Lyric Theater for the
productions of Handel’s Cesare, and Marschner’s Der Vampyr.

Maria is a graduate of University of Toronto, where she earned her Master’s degree in Piano
Performance and Pedagogy, and Bachelor’s degree in Music Education under the tutelage of
Lydia Wong and Dr. James Parker. Recently graduated from New England Conservatory of
Music, she studied with Dr. Cameron Stowe and John Moriarty in the Collaborative Piano
Graduate Diploma program. As a collaborative pianist, Maria has performed in many prestigious
venues such as Jordan Hall, Walter Hall, Boston Atenaeum, Isabella Gardner Museum, Robert
Gill Theater and Museum of Fine Arts. She also took part in eminent summer festivals such as
Toronto Summer Music Festival Academy of Songs, Aspen Music Festival, Opera Nuova,
Opera on the Avalon and Vancouver international Song Institute. As an emerging repetituer, she
has worked with conductors such as Evan Mitchell, Stephen Lord, Jordan de Souza, and Judith
Yan.

She is looking forward to her 2018-2019 season filled with concerts with Music Friends, 100th
year WW1 Commemorative concert at Place des Arts, her debut recital for Vancouver Women’s
Musical Society with tenor, Lyndon Ladeur and making her Opera debut of Cosi fan Tutte with
Opera Mariposa.