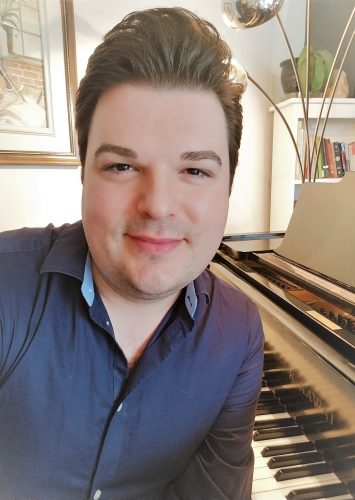 Frédérik Robert has been passionately training singers across Canada for nearly two decades. Mr. Robert is in demand as a private voice teacher, vocal coach for tv & film, adjudicator, in-studio coach, performance coach and music career mentor. Frédérik has a diverse and eclectic studio, his singers range from musical theatre performers, to opera and R&B singers, to TV/FILM actors and Juno Award-nominated artists, to pop and rock singers. In addition to his thriving studio, Frédérik is the Program Coordinator for VAM’s Musical Theatre training program at the Vancouver Academy of Music, Mr. Robert is also dialect and vocal coach on Disney Freeform’s new series Motherland: Fort Salem.

“Frédérik’s coached me back to confidence after a serious vocal injury and, in the process, took me leaps and bound beyond where I thought possible with my singing ability. His training has been a crucial factor in the success of multiple international tours allowing me to sing at my best for up to 2 hours every night after travelling all day. I always feel a shift in his lessons and have tons of breakthroughs as I really get to the bottom of opening up my own voice to sing with ease in my higher register where I used to strain. Frédérik’s training has also been a big help in terms of confidence when I am in the studio making records. Sessions with Frédérik have enabled me to me to showcase my best vocal performance for my songs with ease so that I can feel excited about sharing my work.”

“Frédérik has been a coach and teacher to me for the last four years. Frédérik is intuitive, creative, and a generous educator who genuinely cares about the success of every client. He is fiercely dedicated to inspiring his diverse roster of artists. Frédérik creates a sense of community and an attitude of success. It’s been a privilege to work with Frédérik – to feel his support and care. I’ve experienced a significant transformation in my vocal technique and my experience of singing and performing flamenco music have shifted completely into a sustainable and truly joyful experience. Frédérik has been particularly instrumental in my efforts at launching a successful career as singer/songwriter in my brand new genre of music: Persian Flamenco.”

“After two years of serious training with Mr. Robert I was cast as Gabe in the musical Next to Normal, I won several local and provincial competitions and then competed in the Mr. World competition in England where I became Mr. World Talent. These successes were all fostered by the time, training, and investment of Frédérik Robert through our ongoing lessons. Frédérik has over 20 years of vocal experience; he is well trained, but also an experienced singer and performer in a variety of genres allowing him to adapt his teaching to any genre of music. Frédérik utilizes his extensive training to develop my Pop/R&B voice. He also focuses on extracting the emotion and finding the meaning of the song which has led me to more heart-felt performances.”

“As a specialist in vocal rehabilitation I help singers develop efficient voice production habits. When I refer them on to Frédérik I know the process of healing will continue. His students will receive expert and sensitive guidance in transferring their improved technique into performance.”

“Frédérik was an outstanding voice and language coach on my series MOTHERLAND: FORT SALEM and was beloved by cast and crew. His vast knowledge and experience were invaluable in bringing out the best work from our cast, whom are mostly young actors. Motherland relies heavily on deep vocal power and mastering a complicated new language that was created for the show, which Frédérik brought to life, seemingly with ease. I was always surprised and delighted by Frédérik’s talent, kindness and inventiveness in bringing my vision to life.”

“Working with Frédérik has been an absolute honor. His work is defined by his incredible way of understanding one’s musical instrument – it makes all the difference! And he’s just the most incredible human being! I hope to work with him for years to come.”

“Working with Frédérik is like taking in a breath of fresh air! He is so kind-hearted, gentle, and loving and that seeps through his coachings. Frédérik not only radiates positive energy, which is refreshing, but he makes you want to learn in a fun way. I love Frédérik and ALL of his fabulousness!!!”

“I am a local opera singer and musical theatre actor currently enjoying an active performance schedule abroad. I have counted Frédérik Robert as one of my coaches and teachers for some time now, and his advice and guidance has never been anything less than completely invaluable. When it comes to vocal technique, he is an incredible diagnostician; he can hear exactly what is going on for me as a singer in that moment and prescribe exactly the right solution, should the need arise. He is knowledgeable, encouraging and enthusiastic to the bone about the voice, and he pushes me whenever I need. He is also a fantastic musician and is adamant about getting his students to bring their pieces off the page and to life for their audiences. He makes me more confident, gives me vocal strength, and I know that whenever I enter his studio as a student, I am in safe hands, which to me is the be-all and end-all when it comes to teachers. I have encountered many wonderful teachers and performers; I can easily count Frédérik as one of the best I have ever met.”

Vancouver French Canadian tenor Frédérik Robert has been a performer for over 30 years. He has performed with Vancouver, Calgary, Edmonton and Saskatoon Opera companies. In concert he has been featured as a soloist with wonderful companies like the Winnipeg and Regina Symphonies, National Arts Center Orchestra, and Vancouver Symphony Orchestra.

As a cross-over artist, Frederik has sung leading roles in musical theater/theater productions with the Arts Club Vancouver, BC Living Arts, The Show Co., Out of the Box Theater Productions, and Discovery Playhouse Calgary. As a member of the Canadian Tenors and Romanza Tenors, Frederik toured across North America for nearly ten years, performing in many prestigious venues across US and Canada.