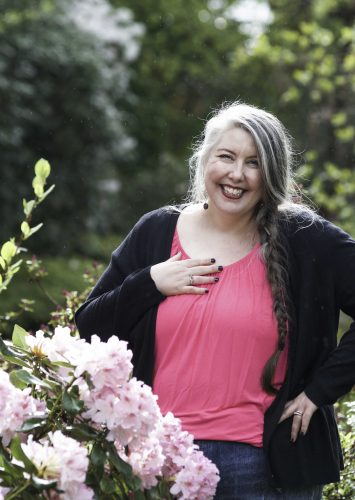 Joslin is lucky enough to be married to the love of her life, and she and her husband live in the bucolic [and sometimes fragrant!] farmland of Delta, BC. They are owned by 2 incredibly spoiled chihuahuas, and they like it that way. She’s the oldest of 4 kids, and her parents have been die hard supporters of her vocal dreams since she danced down the aisle singing along to the hymns at the age of 3.

Soprano, Joslin Romphf Dennis, holds a Bachelor of Music in Voice and a Master of Music in Opera from the prestigious Curtis Institute of Music in Philadelphia, PA, USA. She is also a graduate of the renowned Lindeman Young Artist Development Program under the direction of Maestro James Levine at the Metropolitan Opera in New York City. A native of Victoria, British Columbia, she made her début with the Metropolitan Opera covering Praskovya Osipovna and The Pretzel Vendor in Shostakovich’s The Nose. Joslin made her Carnegie Hall debut under the auspices of the Marilyn Horne Foundation in their annual song festival, On Wings of Song, and made her Canadian opera debut as Elettra in Mozart’s Idomeneo for Pacific Opera Victoria in Victoria, BC, where Paula Citron wrote “POV lived up to its reputation…the find for me was charismatic soprano Joslin Romphf Dennis as Elettra who is a spinto in the making.” Her Canadian orchestral debut came as soprano soloist in Mahler’s 4th Symphony with the Victoria Symphony in Victoria, BC, with whom she has also performed Beethoven’s 9th Symphony. Joslin made her American professional debut with the Opera Company of Philadelphia as Giannetta in Donizetti’s L’Elisir d’Amore where she also performed in a critically-acclaimed Savonlinna Festival production of Verdi’s MacBeth.

Joslin has performed numerous other operatic roles including Female Chorus in Britten’s The Rape of Lucretia, where David Shengold wrote: “With crisp diction and a rich, penetrating soprano, Joslin Romphf Dennis’ Female Chorus furnished the most attractive and individual vocalism of the evening.”, Isabella in Wagner’s Das Liebesverbot, Elle in Poulenc’s La Voix Humaine, Fiordiligi and Donna Anna in Mozart’s Così Fan Tutte and Don Giovanni, the title role in Samuel Barber’s Vanessa, Magda Sorel in Menotti’s The Consul, and the title role in Ned Rorem’s Miss Julie, where Sarah Feidt said: “the voice of Miss Julie (played by Joslin Romphf Dennis ) was a shining high point of the opera. Crisp, clean, full, resonant, she navigated some startling vocal jumps and dives perfectly.” Under the direction of Marilyn Horne, Joslin performed the role of Madame Cortese in Rossini’s Il Viaggio a Rheims for the Music Academy of the West’s 50th anniversary season. She has performed under the baton of James Levine, Mario Bernardi, Maurizio Barbacini, Jacques Lacombe, Ian Robertson and Valery Ghergiev.

Joslin was presented in her New York City solo recital debut with the Marilyn Horne Foundation. She has performed at the Marlboro Festival in Marlboro, VT, USA and was a member of the Young Artists Program at Glimmerglass Opera in Cooperstown, NY, USA. She has also been presented with Richard Epp at the International Voice Teacher’s Conference in Vancouver, B.C., with Mikael Eliasen for the Women’s Musical Club of Winnipeg, MB and with Andrew West at the Ravinia Festival in Chicago, IL, USA as a member of the distinguished Steans Institute.

Joslin has received a Vancouver Opera Guild Career Development Grant, was the winner of the Young Canadian Mozart Singers competition at the Canadian Opera Company in Toronto, ON, and a finalist in the CBC/Radio Canada Young Canadian Performers Competition. She was selected as a semi-finalist in the Loren L. Zachary vocal competition and received grants from the Gerda Lissner Foundation, the Sosenko Foundation and the Rader Foundation, as well as awards and honors from the Metropolitan Opera National Council Auditions and the Edmonton Symphony Orchestra Canadian Concerto Competition.

Joslin has been on faculty with VAM since 2015. She is a member in good standing of the BC Registered Music Teachers Association, Richmond Branch [BCRMTA]. In addition to private voice lessons at VAM, she is also responsible for teaching the college level diction class. She most recently reprised the soprano solo part in Beethoven’s 9th Symphony in March of 2020 with the VAM Symphony Orchestra and the Vancouver Bach Choir under the baton of Leslie Dala for VAM’s 50th Anniversary concert at the Orpheum. Other performances of late include soprano soloist in Verdi’s Requiem with Leslie Dala and the VAM Symphony Orchestra and soprano soloist in Beethoven’s 9th Symphony with Pierre Simard and the Vancouver Island Symphony in Nanaimo B.C..

Joslin has begun adjudicating at various Canadian music festivals, including the Richmond Music Festival in 2015 and 2017, the Port Coquitlam Music Festival in 2017, and the Greater Victoria Performing Arts Festival in April 2017. She was a member of the panel to adjudicate the McLellan Competition for the Winnipeg Women’s Musical Club in March, 2018. In January of 2018, Joslin served as a judge for the 2017 Juno Awards, and in April 2018, she served as voice adjudicator in the Pacific Northwest Music Festival in northern BC. In 2019, Joslin served as junior voice adjudicator at the Lethbridge Music Festival in Lethbridge, Alberta. Adjudication engagements in 2020 included a return to Winnipeg and the Women’s Musical Club as a judge for their semi-annual McLellan Competition. Joslin was invited to return  to Terrace, BC, for the Pacific Northwest Music Festival, and to Victoria for the Roberto and Mary Wood Scholarship concert for the Greater Victoria Performing Arts Festival, but due to COVID-19, these engagements have been postponed until the 2020-2021 season.

Joslin is a passionate advocate of the broad spectrum of vocal music, which encompasses the areas of opera, classical, chamber, musical theatre and contemporary. Joslin believes the best possible voice is built on solid, healthful technique, thus enabling her students to embrace their full vocal potential. Most of all, Joslin wants her students to enjoy the process of learning to sing – her lessons are fun and informative for all ages and levels. She is, as always, thrilled to be a part of the voice faculty and looks forward to bringing her experience and training to her lessons with the students of the Vancouver Academy of Music.