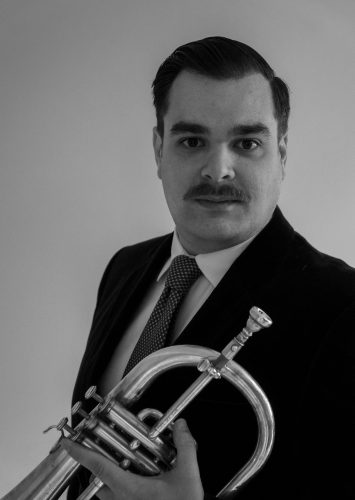 Jeremy G. Vint is a versatile musician and a passionate music educator. He holds a Master of Music Degree in Trumpet Performance from the University of British Columbia and has performed professionally for 20 years. He is as comfortable as he is proficient in a variety of styles, ranging from Baroque to Modern (as a symphonic or chamber musician), Jazz, Latin, and Popular Music. He has performed across Canada and the United States, in The United Kingdom, France, Mexico, Taiwan, and Hong Kong. He plays in the Kamloops Symphony, and has frequented the Okanagan Symphony, Vancouver Island Symphony, and the Vancouver Metropolitan Orchestra. He has been a featured Soloist in many Canadian cities and has performed in numerous festivals in BC and beyond, including the Vancouver International Jazz Festival, Encuentro Internacional del Mariachi de Guadalajara, The Salmon Arm Roots and Blues Festival, Skookum Fest, The Banff Center for the Arts, The Calgary Stampede, NXNE, among many others. Jeremy also composes music in the cinematic and ambient genres, and loves creating and improvising music for synthesizers and effected trumpet and flugelhorn.