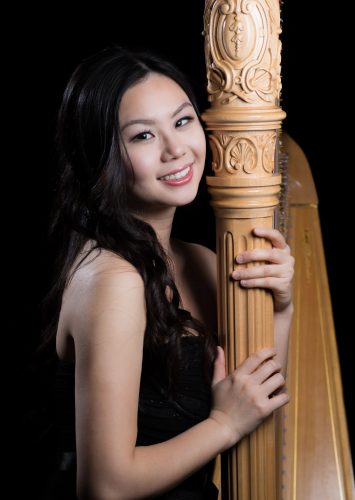 Taiwanese-Canadian harpist Dr. Joy Yeh serves as the Head of the Harp Department at the Vancouver Academy of Music and a faculty member at Kwantlen Polytechnic University. She obtains a Doctor of Music degree from the Indiana University, a master degree from Yale University and a bachelor degree from UBC.

Dr. Joy Yeh is a frequent judge at international music competitions and festivals including the Canadian Music Competition and the Camac Prize International Harp Competition, and has taught masterclasses in Asia and North America. Students from different countries were inspired by her passion to study with her, including France, Germany, Turkey, Iran, USA, Australia, Hong Kong, China, Taiwan, Singapore, Thailand and Malaysia. As a result, Dr. Yeh was awarded Teacher’s Certificate of Recognition by the RCM for having her students score the highest marks in their examinations. To complete their training and résumés, her students are well-connected and active in performing with local art organizations like the Vancouver Bach Choir, Vancouver Metropolitan Orchestra, Sunshine Coast Symphony Orchestra and the Richmond Symphony Orchestra.

Efficiency, Passion and Precision are the three major components to Dr. Yeh’s teaching. Her students have won medals at several international music competitions having just studied with her for 1-2 years with no previous musical background. Some parents described that being in her studio has been a “life transforming” experience for their children, as the kids grew dramatically in their confidence, artistry and concentration. Her students continue to amaze judges at RCM examinations as well; one of her 7 year pupil just scored 96% in her RCM gr. 2 exam – having 2/3 of her repertoire marked perfect score.

Dr. Yeh believes in “leading by example”. Therefore, despite her busy teaching schedule, she insists on having an active performing career. She has been featured numerous times as a soloist with the Vancouver Symphony Orchestra, Vancouver Metropolitan Orchestra, Prince George Symphony Orchestra, Kamloops Symphony Orchestra and the UBC Symphony Orchestra. She has played at Carnegie Hall, Kozertberlin, World Harp Congress (Canada and Hong Kong) and Schleswig-Holstein Musik Festival in Germany. Her recordings can be heard on CBC Radio2, and she was interviewed by medias such as the Fairchild Radio FM96.1, CFJC Midday TV, Talentivision TV and their Evening News, Richmond Review and Taste of Life Magazine. In the earlier years, Dr. Yeh was awarded the Canada Arts Council Grant for professional musician, twice by the British Columbia Arts Council and the Grand Prize winner of the Vancouver Women’s Musical Society Scholarship Competition, the UBC Concerto Competition, and First Place of the Burnaby Clef Concerto Competition, in which she was the only time a harpist was chosen as 1st Prize Winner in the Burnaby Clef Society’s 25 year history.

Fun Facts: Her students have had unique experiences due to their talent in harp, including winning the first place of Miss Little Sunshine Vancouver and be featured at TV commercials playing their harps!