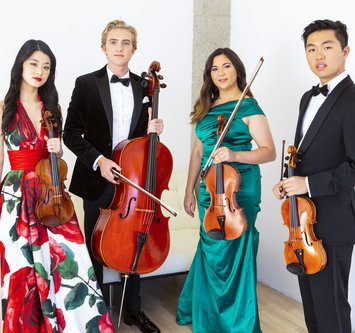 Praised for their “huge range of dynamics, massive sound and spontaneity” (American Record Guide), the Viano String Quartet are First Prize winners of the 2019 Banff International String Quartet Competition. Formed in 2015 at the Colburn Conservatory of Music in Los Angeles, where they are Ensemble in Residence through the 2020-21 season, the quartet has performed in venues such as Wigmore Hall, Segerstrom Center for the Arts, SOKA Performing Arts Center, and the Cerritos Center for Performing Arts.

During the 2019-20 season, the Viano performs on three continents, making debuts in Beijing, Berlin, Brussels, New York City and Vancouver, among other cities. The quartet also gives several performances in Los Angeles at Boston Court Pasadena, the Music Guild, and Zipper Hall and records for the Canadian Broadcasting Corporation.

The Viano String Quartet has performed with world class musicians such as pianists Emanuel Ax and Elisso Virsaladze, violist Paul Coletti, violinist Martin Beaver and vocalist Hila Plitmann. They have performed in Los Angeles for the South Bay Chamber Music Society and the Colburn Chamber Music Society; in Marquette, Michigan for the Siril Concert Series; and with NPR host Rob Kapilow on his “What Makes it Great?” Series.

Committed to engaging with children and communities outside the concert hall, the Viano String Quartet has given presentations for school children and students of all ages through residencies in Bellingham, Washington – the “Play it Forward” residency, a collaboration between the Bellingham Festival of Music and the Whatcom Symphony to reach school children in the northern Washington State area – Northern Michigan University, and the Santa Monica Conservatory. In 2019 they gave multiple performances of “Over the Top”, a Musical Encounter Interactive presentation they scripted, developed and performed at the Colburn School for inner city school children.

The Quartet works primarily with Martin Beaver, as well as other members of the Colburn School faculty, including Scott St. John, Clive Greensmith, Paul Coletti and Fabio Bidini. They have received coachings from artists such as David Finckel, Gary Hoffman, Arnold Steinhardt, Jean-Yves Thibaudet, and members of the Emerson, Brentano, St. Lawrence and Calidore String Quartets. They have attended the St. Lawrence String Quartet Seminar, and the Norfolk and MISQA summer festivals.