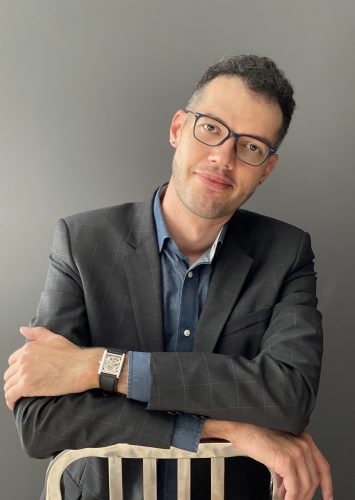 Dr. Bogdan Dulu has been on faculty at the Vancouver Academy of Music | S.K.Lee College since 2016, serving on both college and pre-college divisions. He teaches piano, chamber music, and the Career Development course.

His reputation as a fast and reliable learner has helped consolidate his standing as one of Vancouver’s go-to pianists for last-minute musical emergencies of considerable might. Such came his Vancouver Symphony Orchestra debut under late music director, Bramwell Tovey, who asked him to step in on a 20-day notice to learn and subsequently premiere the Shalimar Variations, Tovey’s 25-minute concerto for piano and orchestra. The premiere performance was recorded by the CBC.

Dulu also competed in some of the more prestigious international piano competitions, among them Sendai, Helsinki, New Orleans, Calgary (Honens), Bucharest (Enescu), Cincinnati, and Seattle. He toured extensively across Canada as a signed artist with Jeunesses Musicales and Debut Atlantic. His High-Voltage Piano/Piano Haute-Voltige program highlighting piano music of Marc-André Hamelin reached audiences across Eastern Canada with a marathon tour of 19 solo recitals in 7 weeks. He also toured the Northwest Territories, reaching communities above the Arctic Circle. He has performed in Europe, North America, Asia, and Africa, being equally at home as a soloist as well as a chamber musician, collaborative and orchestral pianist, coach, or public speaker. Radio appearances include NHK Tokyo, YLE Finland, Romanian Radio, KING FM Seattle, WFMT Chicago, and the CBC.

Since the 2020/2021 season, Bogdan Dulu can be heard playing the piano, celeste, synth, and the harpsichord in the Vancouver Symphony Orchestra.

Dulu completed his undergraduate studies in Bucharest, Romania. He holds graduate degrees from Mannes School of Music in New York CIty (Masters) and the University of British Columbia in Vancouver (Doctorate). His principal teachers include Jane Coop, Irina Morozova, and Ana Pitis (piano), Rena Sharon, Verona Maier, and Viorela Ciucur (chamber music and collaborative studies). Dulu is the first pianist to have written a doctoral dissertation on Marc-André Hamelin’s piano Études, researched under the personal guidance of the Canadian composer-pianist. It was during his doctoral studies at UBC that he developed a keen interest in the music of this legendary artist, with whom he worked closely during the final stages of the degree.

Dr. Dulu has also taught piano at the UBC School of Music as a sessional instructor. He is a sought-after adjudicator for festivals and concerto competitions, and has given masterclasses at Dalhousie University, University of New Brunswick, and Douglas College, among others. He serves on the advisory committee for the Pacific International Youth Music Society, and is a member of the Canadian Federation of Musicians.

Bogdan is a proud naturalized Canadian citizen, and lives on the traditional and unceded territories of the Musqueam, Squamish, and Tsleil-Waututh nations, colonially known as Vancouver, British

Columbia. He is an amateur competitive cyclist, and has a rather costly affinity for carbon road bikes. www.bogdandulu.com