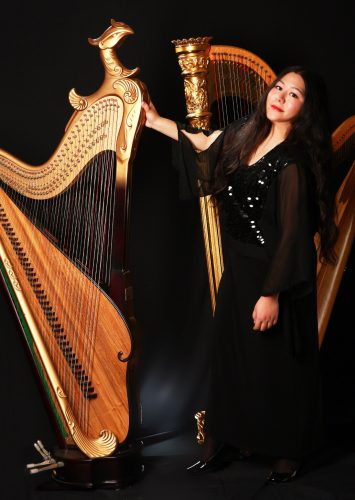 Nathania Ko is a Harpist, Konghou player, and composer based in Vancouver, Canada. She obtained her Master’s degree from the University of British Columbia, studying the Harp with Elizabeth Volpé Bligh, and a Bachelor’s degree from Shenyang Conservatory of Music in China, where she studied the Konghou with Hong He.

Nathania was a finalist at the 2022 World Harp Competition held in Utrecht, Amsterdam by the Dutch Harp Festival, and she was also a finalist at the Creative Media Competition held by the 13th World Harp Congress in Hong Kong, where she served as a member of the hosting committee. Nathania has given lecture recitals and masterclasses in major cities such as Vancouver, Xi’an, Beijing, Shenyang, and virtual academies such as the Virtual Harp Summit. In 2019, Nathania presented her research, “Music Unearthed from the Silk Road,” at the MUSCAN conference. Her students are located across the globe in the UK, China, USA, Canada, Singapore, Ireland, and France.

Nathania not only plays the Western Harp, but she is also the only Konghou (Chinese Harp) player in Canada. She is engaged in international World Music events and has been involved with music festivals such as the premiere Silk Road Music Festival in Xi’an, Yo-Yo Ma’s YMCG in Guangzhou, and Wu Man’s Improvisation Workshop in Beijing. She is an active performer in Vancouver and China, and her compositions became Konghou examination repertoires that have been awarded gold and silver prizes in major Chinese national competitions. As a cultural bridge between Chinese and Canadian music, Nathania’s extensive travel and performances were supported by grants from the Canada Arts Council and the British Columbia Arts Council.

Nathania seeks to incorporate multicultural aspects into her teachings to help her students expand the genres in their musical repertoires. Her pedagogical methods include effortless and natural playing to ensure a stress-free learning process. Her students range from beginners to professionals, and she customizes efficient learning plans to fit each student’s needs and hone their musicality.