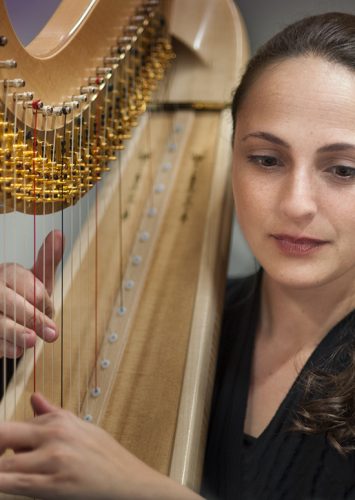 Lani Krantz is a versatile BC Based Harpist who performs both as orchestral harpist, chamber musician and as vocalist/harpist on pedal harp and Celtic harp.

As a third-generation, professional musician, Lani was exposed to a number of instruments and musical styles from an early age. Though born in Alberta, Lani spent her high school years in Victoria BC where she studied voice with Ms. Sung Ha Shin Bovey (Associate Professor UPEI), piano with Dr. Gilbert Monroe and harp in the studio of Ms. Taka Kling. Lani was a member of the Oak Bay Secondary choir and vocal jazz ensembles and was accepted to perform with the BC Honour Choir.

Lani went on to study music at the University of British Columbia, majoring in harp performance with Ms. Elizabeth Volpe-Bligh (Principal Harp, Vancouver Symphony Orchestra). Her studies in orchestral harp continued at the Aspen School of Music in Colorado with Ms. Stacey Shames & Ms. Katherine Thomas and then in Toronto with the National Youth Orchestra and Canadian harp virtuoso, Ms. Judy Loman.

Lani collaborates with Erhu Specialist, Rong Jun and composer/ conductor, Jin Zhang to perform traditional Chinese Songs set for Western Harp and Erhu. Rong Jun and Lani have performed a number of concerts together and were showcased at the Sound of Dragon Festival, Vancouver and at the Opening Gala Concert of the World Harp Congress. Most recently, Lani has joined forces with the charming, Janelle Nadeau in an innovative and exciting new harp duo, Pure Harp  and trio, Harps Ignited  which includes latin/jazz percussionist, Raphael Geronimo.

As a touring musician, Ms. Krantz performs with the acclaimed, Winter Harp and has also toured across Canada with both the National Youth Orchestra and with the Vancouver Symphony Orchestra. As a freelance harpist, Lani has taken the stage with many famous performers, such as; Il Divo, Josh Groban, Andrea Bocelli, Sarah McLachlan and Johnny Mathis, Steven Page and more. Lani accompanies actress/singer, Appollonia Vanova’s on her CD, Lullabies and her playing can be heard on the soundtracks for the Disney films; Space Buddies and Super Buddies and at the Canadian tourist attraction; Fly over Canada.

Lani is a Royal Conservatory of Music Gold Medal Teacher.  In 2016, she added ‘Mom’ to her list of titles and is enjoying watching her little boy start on his own musical journey!