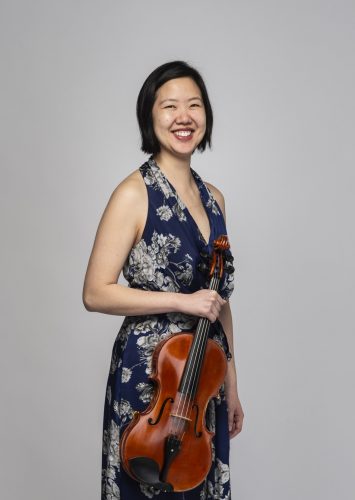 Born and raised in Vancouver, Sarah began her musical training at an early age with the Suzuki method and has most recently completed a Doctor of Musical Arts degree at the University of British Columbia, studying with David Harding. She also studied at the University of Toronto, where her teachers were Steven Dann and Scott St. John.

An active freelancer, Dr. Kwok performs with the Vancouver Symphony, the Vancouver Opera Orchestra, the Vancouver Island Symphony and the Okanagan Symphony, and has played in concerts presented by the Chutzpah Festival, Sonic Boom Festival, and Music on Main. Sarah is a founding member of the Elysian Trio, with flutist Paul Hung and harpist Vivian Chen, and has also appeared with Turning Point Ensemble, Erato Ensemble, and the Vancouver Inter-Cultural Orchestra. She was part of Duo 101 Collective, the ensemble-in-residence at Simon Fraser University’s School of Contemporary Arts, and has participated in the Tafelmusik Baroque Summer Institute, the St. Lawrence String Quartet Chamber Music Seminar, the Berwick Academy, and a residency program at the Banff Centre for Arts and Creativity.