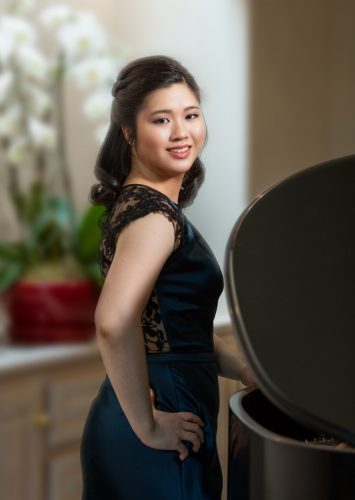 Hailing from Vancouver, British Columbia, Jocelyn Lai has distinguished herself as one of Canada’s most prolific and versatile young artists. As a concert pianist, she performs at festivals and academies across Canada, the United States, and Spain, with past appearances at prestigious venues such as the Weill Recital Hall at Carnegie, Chan Center for the Performing Arts in Vancouver, and Paul Hall at the Juilliard School. Recent performance highlights include a solo concert in the Montreal Chamber Music Festival at the Salle Bourgie, a featured faculty recital at Hunter College, and performances at the 2019 Hilton Head and West Virginia University International Competitions.

As an educator, Jocelyn lectured on topics in music theory while on the faculty of Hunter College (New York), guided children through private piano instruction at the Nord Anglia International School, and has years of experience teaching secondary piano at the Juilliard School. Furthermore, she has given presentations through education outreach programs in Vancouver, New York, Cleveland, and Hilton Head.

A graduate of the Vancouver Academy of Music studying with Lorraine Ambrose, she went on to earn a Bachelor of Music in Piano Performance from the University of British Columbia School of Music, a Master of Music from the Juilliard School, and an Artist Diploma from the Cleveland Institute of Music. Currently, she is a doctoral candidate at the City University of New York Graduate Center. Her musical inspiration and guidance come from her principal teachers: Jane Coop, HaeSun Paik, and Julian Martin.