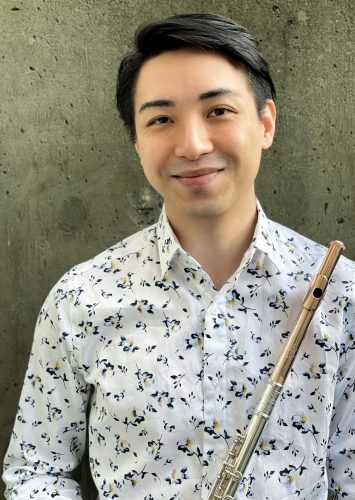 A native Vancouverite, Thomas is an active flute/piccolo player and teacher across the Lower Mainland.

As a passionate teacher, Thomas teaches students of all ages (currently the count is 5-85+!), proving that it is never too late to pick up an instrument. He will happily teach beginning first lessons all the way to university preparation and everything in between. Thomas has experience preparing students for RCM exams, competitions and band/orchestra auditions with successful students admitted to honour bands and university programs.

Thomas often coaches band clinics (which he has dubbed “Thomas’ Tiny Tips”) in schools and community groups in Vancouver and previously, Victoria. He formerly taught group classes at St. James Music Academy and was a post secondary teaching artist in association with the VSO’s Connects program to bring music education and awareness to elementary and high schools.

Thomas’ teaching focuses on helping students become independent, inquisitive and joyous learners while equipping them with the practical tools to facilitate musical and technical obstacles.

As an enthusiastic collaborator, Thomas has had the opportunity to perform from duo recitals to orchestra sized ensembles. Some highlights include sharing the concert stage with: MedLaw Duo (with Luis Medina) and Vistoso Duo (with Nikola Markovic), Symphony 21, Vancouver Metropolitan Orchestra, Victoria Symphony, Kamloops Symphony and Flipside video game band.

He has enjoyed concerto and recital concerts with Capilano University,  Victoria Conservatory of Music, Greater Victoria Youth Orchestra, and the Victoria Bach Ensemble.

In addition to playing classical repertoire, Thomas takes the time to delve and dabble into other genres of music to continue broadening his perspective. He particularly enjoys learning the baroque traverso flute in his spare time and figuring out ways to make the flute more “cool”.