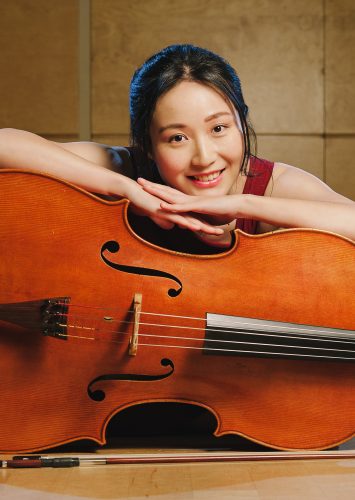 Taiwanese-Canadian cellist Judy Lou completed her musical training (B.Mus. & M.Mus.) in University of British Columbia (UBC) under the tutelage of renowned cello professor, Eric Wilson (M.Mus. Juilliard). During her studies, she made numerous solo performances, served as the principal cellist of UBC Symphony, and won the prestigious Friends of Chamber Music award for her string quartet, which was invited to perform at the Zhongli Arts Hall in Taiwan. These experiences were further cemented by her collaboration with Eric Wilson in a series of international charity chamber concerts in Canada, Taiwan, and Palau.

Since graduation, she continued to perform regularly as a soloist and collaborated with orchestras, string ensembles, and chamber groups. Notably, Judy was featured in the Vancouver Art Gallery series, with Arietta Quartet and Libby Yu. Most recently, Judy performed in Muzewest concert series with Timothy Steeves and Feng Bian for a piano trio concert and she also joined Takumi Taguchi, Samuel Tsui, Tawnya Popoff, Manti Poon and Michael Noble for a chamber concert. These experiences are supported by her role as a musical educator, in which she thrives as the faculty member of Langley Community Music School, Abbotsford Community Music School and Pacific Chamber Music Academy.

As an educator, Judy has had training in Suzuki Method with experienced trainers Catherine Walker and Abbey Hensen. Through the inspiration of her teachers, she has audited many classes such as the group class by Kristl Armstrong. She has been a passionate teacher for 8 years and continues to strive for excellence in students’ playing and as a musician. Her students have completed RCM exams and competed in Kiwanis Festival with high grades. As a sectional teacher, she has assisted Vancouver Youth Symphony Orchestra debut and junior string ensembles also lead the sectionals for Surrey Youth symphony orchestra and Langley Community Music School intermediate string orchestra. Although she is classically trained, she has performed numerous contemporary pieces and is comfortable with musical styles of all forms. She strongly believes that music can improve lives and is constantly working with fellow musicians to share the enthusiasm for art.