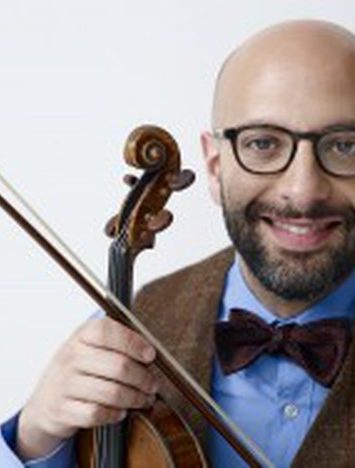 John Marcus is a native New Yorker, and a graduate of The Juilliard School, where he received his pre-college division diploma, and his Bachelor and Master of Music degrees. He also holds a postgraduate certificate from the Guildhall School of Music and Drama in London. His teachers include Dorothy DeLay and David Takeno. As a member of the Grammy-nominated Enso String Quartet, John has performed extensively as a chamber musician throughout the United States, Latin America, and Europe. He gave his first public performance at the age of nine at the Mozarteum in Salzburg; and at fifteen, he performed at Lincoln Center as the winner of the Julliard Violin Competition. For the 1993 gala opening of the Harris Concert Hall in Aspen, Colorado, John appeared as a soloist alongside Pinchas Zukerman and the Aspen Chamber Symphony. For this occasion, the Stradivarius Society of Chicago lent John the 1742 “Burmeister” Guarnerius del Gesu violin. John has frequently toured Germany as a recitalist, and recently premiered the John Corigliano Sonata for Violin for Westdeutscher Rundfunk, Germany’s leading public radio network. In his hometown of New York City, John has performed for numerous concert series, including LPR, Barbes, BargeMusic and in collaboration with members of Yo-Yo Ma’s Silk Road Project. John has also performed with the Mark Morris Dance Group, and the New Juilliard Ensemble. As a member of the New York-based chamber music group “The Knights” he has toured throughout the United States and Europe. John has performed at many festivals, including Ravinia, Aspen, Tanglewood, Interlochen, San Miguel de Allende, Campos do Jordao International Winter Festival, Verbier, and Spoletto. Musicians with whom John Marcus has worked include James Dunham, Vera Beths, Ursula Oppens, Sam Rhodes, Peter Oundjian, and Cho-Liang Lin. John loves to cook for his family, and plays on a Samuel Zygmuntowycz violin made in 2003 in Brooklyn, New York.