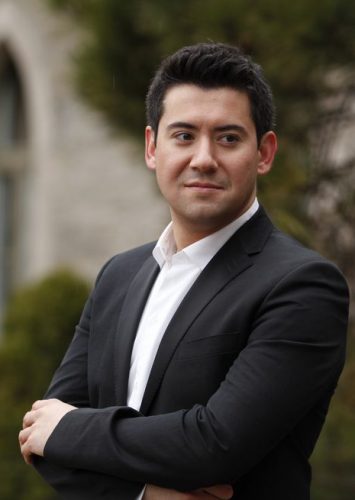 Magnetic, easy-going, and delightfully articulate, Canadian pianist/conductor Ian Parker captivates audiences wherever he goes. As a pianist, he has appeared with top Canadian orchestras including the symphonies of Toronto, Quebec, Vancouver, Victoria, Winnipeg, Edmonton, Orchestre Métropolitain, and the Calgary Philharmonic. In the U.S., orchestral highlights include the San Francisco, Cincinnati, National, Santa Barbara, Richmond, and Honolulu symphonies as well as the Cleveland Orchestra at Blossom, to name just a few. During the 2019/20 season, Mr. Parker will make his debuts with the Savannah and Bakersfield symphonies, and will return to the Pensacola and Okanagan symphonies, among others.

In addition to his work at the keyboard, Ian Parker is currently in his second season as music director and principal conductor of the VAM Symphony Orchestra at the Vancouver Academy of Music. Working with some of Canada’s most promising young orchestral players, Mr. Parker programs and conducts four concerts per season in Vancouver’s historic Orpheum Theatre. In July 2020 he will lead the orchestra in a 50th anniversary tour throughout China. He is also artistic director of the Resonate chamber music series at the Kay Meek Centre in North Vancouver.

An enthusiastic recitalist, Mr. Parker has performed across the United States, Europe, Israel, and throughout Canada on tours with Debut Atlantic, Jeunesses Musicales du Canada, and Piano Six. Recital highlights include the Walter Reade Theater at Lincoln Center, UCLA, the University of British Columbia, and collaborative performances at the Hawaii International Music Festival and the Morgan Library in New York City.

Mr. Parker’s recordings include a CD with the London Symphony conducted by Michael Francis featuring three piano concertos: Ravel Concerto in G, Stravinsky Capriccio, and Gershwin Concerto in F, released by ATMA Classique, and an all-fantasy solo CD including fantasies of Chopin, Schumann, and Beethoven on Azica Records. Additionally, CBC Records released a recording of three Mozart concertos for one piano (K. 467), two pianos (K. 365), and three pianos (K. 242) featuring Mr. Parker and his two cousins, Jon Kimura Parker and Jamie Parker, with the CBC Radio Orchestra and Mario Bernardi on the podium.

First Prize winner at the 2001 CBC National Radio Competition, Ian Parker has also won the Grand Prize at the Canadian National Music Festival, the Corpus Christie International Competition and the Montreal Symphony Orchestra Competition. At The Juilliard School, he received the 2002 William Petschek Piano Debut Award and, on two occasions, was the winner of the Gina Bachauer Piano Scholarship Competition. Heard regularly on CBC Radio, he has also performed live on WQXR (hosted by Robert Sherman) in New York.

Born in Vancouver to a family of pianists, Mr. Parker began his piano studies at age three with his father, Edward Parker. He holds both the Bachelor and Master of Music degrees from The Juilliard School, where he was a student of Yoheved Kaplinsky. While at Juilliard, he was awarded the Sylva Gelber Career Grant by the Canada Council for the Arts, presented annually to the “most talented Canadian artist.”