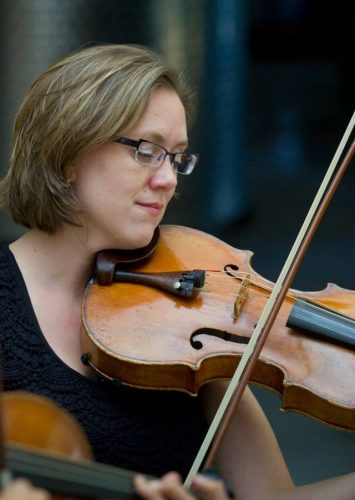 Canadian violist Tawnya Popoff enjoys an exciting and versatile international career. In addition to being principal violist with the Vancouver Opera (BC), she is a member of the River Oaks Chamber Orchestra (TX), the Walden School Players (NH) and a founding member of Microcosmos string quartet/Kessler Academy (BC).  Ms. Popoff is in demand as a chamber music collaborator, has given solo and chamber music recitals throughout North America and Europe.  She was a prizewinner in the 2000 Lionel Tertis International Viola Competition and a recipient of two consecutive Canada Council Individual Grants.   Valuing education immensely, she has served on the faculties of the Perlman Music Program, University of Pennsylvania, Syracuse University, SUNY Buffalo, Brandeis and Dobbs Ferry High Schools, the Bowdoin International Music Festival, The Walden School, and Artes no Camiño (Spain) and in her private studio.

Ms. Popoff has a keen interest in inter-disciplinary projects and has worked and toured internationally with Cedar Lake Contemporary Ballet and Cherylyn Lavagnino Dance in New York City, Marta Marta in Vancouver, BC and the trans-media New York group Vision Into Art. She is passionately devoted to developing and performing music by living composers especially those under 18yrs at The Walden School.  She has recorded for the Koch, Albany, Nonsuch, CRI, SHSK’H (web label), Columbia Composers and other independent labels as has been heard on air on WNYC, CBC, WGBH (Boston) and KUHF (Houston).   She studied with Gerald Stanick (Fine Arts Quartet) in Vancouver, BC and Martha Katz (Cleveland Quartet) at Rice University in Houston, TX and was based out of NYC before relocating to Vancouver in 2014.

Aside from musical pursuits, Ms. Popoff had a cycling tour company in NYC, designs handmade games and toys for her little friends, volunteers regularly and passionately enjoys the great outdoors in all seasons by foot, ski, sail and bicycle!