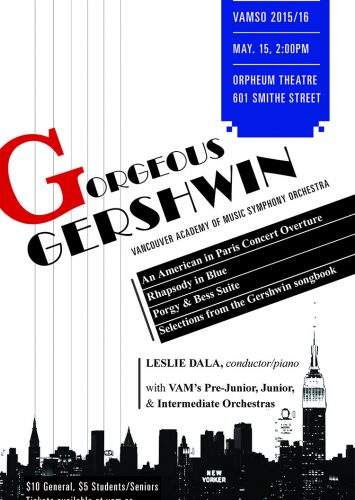 With a great bustling of commotion, the 2015/16 Orpheum Series comes to a lively end with the jazz-infused music of George Gershwin. Guests from VAM’s Orchestral Training Program combine forces with VAMSO to turn the Orpheum into the streets of New York, presenting a variety of favourites including An american in Paris, Rhapsody in Blue, Porgy & Bess Suite, and selections from the Gershwin songbook.

George Gershwin’s compositional career spanned both classical and popular genres, and gave the world such instantly recognizable tunes as Embraceable You, I Got Rhythm, and the widely covered jazz standard,Summertime. Born and raised in Brooklyn, New York, he was hired at a young age as a songwriter in “Tin Pan Alley”, the Manhattan hub for music publishers of the late 19th century, and birthplace of the U.S. music industry.

The composer had his first song published at 17 years old, and his first national hit, Swanee, at age 20. Gershwin later went on to create music for stage, including the opera Porgy & Bess and musicals Show Girl and Girl Crazy, film scores such as the Fred Astaire & Ginger Rogers classic Shall We Dance, and orchestral compositions that regularly debuted in Carnegie Hall. Gershwin’s legacy is all the more impressive given the short window in which it was established: the composer died from a brain tumor at just 38 years of age.