For our last interview with our Leading Ladies, we were happy to take a few minutes of Dora Brooks’ time to chat about her roles and her history with opera. Dora is an alumni of our College Program, where she completed her Artist Diploma and Bachelor of Music degress in Voice Performance with David Meek. She’s been the recipient of many prestigious scholarships and bursaries, and has most recently received a generous award from the Vancouver Opera Guild. She’ll be singing the role of Angelica in Suor Angelica.

If you’ve enjoyed these interviews, why not come down and check out their talent in person? Buy tickets for Suor Angelica & Gianni Schicchi here.

What do you enjoy most about singing Suor Angelica?

I love this role very much, for many reasons. What I most enjoy, though, is the build of the character arc, both musically and dramatically. She’s a very real and honest character and her music is gorgeous.

Favourite scene from Suor Angelica and why?

Suor Angelica is my favorite Puccini opera, so it’s hard to pick just one scene. I guess I’d pick the end of the opera from la Principessa’s entrance on. It’s considered two scenes, but the first flows so well into the second, and it feels like one extended scene. So much happens in such a short time- from joy to heart break to loss of reason to a miracle and more. Performing it is emotionally draining in the best way. This section also contains Senza Mamma, which is one of my favorite arias. The music is glorious in this whole section.

What should the audience listen or look for when they come to watch the production?

In both operas we have people singing from off-stage. It’s particularly effective in Suor Angelica during the miracle. I heard it for the first time last night and it’s so very much better than I’ve ever heard done; I’ve actually performed in Suor Angelica twice before. One time the chorus actually sang from the choir loft up in the rafters of the curch we were performing at. This sounds even more amazing than that! It’s also the first time you will hear any male voices. As for things to look for, there are a seemingly infinite number of small details to see, as directed by Jeanine Fynn. For example, I’ve watched a bunch of rehearsals of Gianni Schicchi and I’m still noticing more. But I won’t tell you what they are- that would spoil the fun!

What’s your favourite part of the productions?

Again, how to choose? The most overall would be singing the role of Suor Angelica. When I first started singing opera I thought it was a role I’d never have a chance to sing. Which was sad for me since it’s one of my favorites. I’m very happy that things have changed so that I can. I’ve also enjoyed learning new things through the process of costuming the production. One of the things I love about both singing and costuming is that there’s always something new to learn- I love being challenged.

How did you get into opera?

I only ever sang a couple opera arias before I started at the Academy. I had been training for about ten years as a classical and musical theatre singer, but I was too young for opera. I’d not been exposed to very much of it, either. That changed when I started at VAM right out of high school and discovered that I could sing opera. I very quickly fell head-over-heels in love with it and now I can’t imagine going without!

What have you enjoyed the most during your experience at VAM?

I’ve been at the Academy first as a college student, now as a private student. I’ve loved how many performances there are for the opera program throughout the year. Any chance to perform and develope my craft makes me happy. Working with David Meek and the other fabulous people he’s brought in to work with us
(John Arsenault and Jeanine Fynn for example) has been a treat.

I think that if you’re new to opera, or aren’t sure about it, that this would be a good show to check out. These two operas are so different from each other that there’s a little bit for everyone to enjoy. Whether you like drama, tragedy or comedy we have you covered. Prefer under-handed trickery? Done. Familial tension? Ok. Simple joy at a beam of sunlight turning a fountain’s water golden? Yes. Physical comedy? We have that, too. I’ve had such a great time working on this show and I’d love to share it with people. That’s one of the best parts! 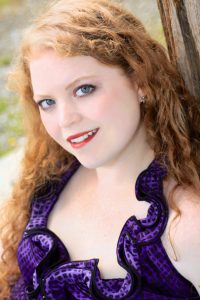