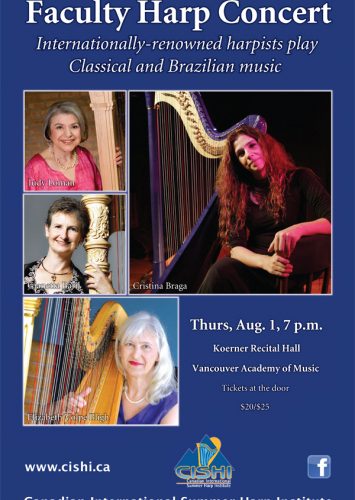 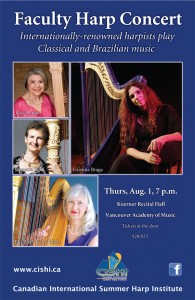 Four internationally renowned harpists take to the stage with an eclectic and thrilling combination of heavenly classics and sensual Brazilian music, Thursday, August 1 at 7 p.m. at Koerner Recital Hall at the Vancouver Academy of Music, 1270 Chestnut Street, Vancouver. Tickets $20/25 at the door.

All four artists are faculty members of the prestigious Canadian International Summer Harp Institute (CISHI) which attracts students from around the world eager for two weeks of intensive training with these acclaimed performers and teachers.

The concert will feature a delightful combination of classical and Brazilian music — in harp solos and harp ensembles.

“This is a rare opportunity for people to hear these incredible players in an intimate setting, and playing a wonderful variety of music,” said Institute co-founder and Vancouver Symphony principal harpist Elizabeth Volpé Bligh.

Cristina Braga has turned the harp world upside down with her sensual renditions of South American bossa nova classics. With her sultry voice and her powerful and rhythmic harp playing, she wowed MusicFest Vancouver audiences last year with her near-sold-out performance at Christ Church Cathedral.

The principal harpist with the Rio de Janeiro Municipal Theatre Symphony Orchestra has 13 recordings and is considered the world’s leading harp player of Brazilian music. Cristina Braga has performed as soloist with numerous orchestras and has performed and recorded with many leading Brazilian singers. She regularly tours the US, Europe and Japan.

The incomparable Judy Loman is widely recognized as one of the world’s foremost harp virtuosos, having won the admiration of audiences and critics alike across Canada, the United States, Europe and Japan. She has appeared as a guest artist with numerous orchestras including the BBC Symphony. In addition, she was principal harpist with the Toronto Symphony for 43 years and featured as soloist in Toronto and on tour. A prolific recording artist, Judy Loman has had numerous works written for her, many of which have become new “standards” for harpists worldwide.

Completing the quartet are the Institute’s co-founders Elizabeth Volpé Bligh and Gianetta Baril.

Juno award-winning harpist Gianetta Baril has had a distinguished career for over 30 years. While concertizing throughout Germany, France, England, Poland, and the Czech Republic, she consistently received glowing praise for her charming presence, dramatic artistry and spectacular technique. Career highlights include performances behind the Iron Curtain, in some of the great concert halls of Europe and at the World Harp Congresses in Vienna and Paris, as well as a soloist for the Queen, Prince Charles and the late Lady Diana.

Elizabeth Volpé Bligh has been principal harpist of the Vancouver Symphony for 31 years and harp instructor at UBC almost as long. Her career includes concerto performances with the Grammy-winning VSO and other orchestras, chamber music concerts, music festivals, movie soundtracks, recordings and a solo recital at the International Harp Workshop in Crea, Italy in 2012. She has premiered several Canadian works written for her, notably Michael Conway Baker’s Harp Concerto, and will be premiering a new piece by Scott Good at the 2014 World Harp Congress in Sydney, Australia. Reviews have included “a harpist of great skill” (Ray Chatelin) and “achingly lovely playing” (Michael Scott).